I have long been interested in understanding minds that I have identified as somehow different than mine -minds that seem to have certainty, hold strong opinions and assert their knowledge strongly. Very early on in our relationship, I called this trait in my husband his hero complex -he sees the world in black and white and sure he is right and everyone who disagrees with him is simply wrong. I believe it might be what drives him to action and away from the immobilization that doubt can cause. When I first started dating him and even when I married him, he was a hard-core, Reagan-loving, Iraq war-supporting Republican. After years of prodding him, pushing him and gently loving his mind, he is now a hard-core, Cenk Uygur-loving, occupy Wall Street-supporting Progressive. Throughout all this change, he remains breathtakingly brilliant, possibly the most captivating and active mind I will ever have the pleasure of engaging with.

Since I have started up Hungry Minds, I have gotten to know many more intelligent and knowledgeable people who simply know what is what when they encounter an issue, or they expect that they will with just a bit of information. For them, there is a right and wrong answer, they have their point of view just as set as it is well informed. Encountering more and more of these minds has fueled my curiosity about how my mind is different –why do I answer pretty much every question out there with a ‘perhaps’?

I sometimes wonder if it is because of my academic training in philosophy and history. Both of these disciplines push the mind away the idea that there is objective truth to be found and teach the practitioner to look for nuance and levels of truth, at the same time as providing the tools to critically evaluate claims of knowledge and truth. They also teach the student to search out multiple points of understanding and open the mind to seeing how it can be fatally biased to judge evidence from its own massively limited perspective. I remember being taught to carefully dissect text, find understanding of it and then add it to your base of knowledge based on an analysis of how it related to what I had already encountered. This is a very long process and I’m usually continuously trying to understand things I have read in the past as I learn new things. However, my husband and others have very similar academic training and habits and they still are not like me. 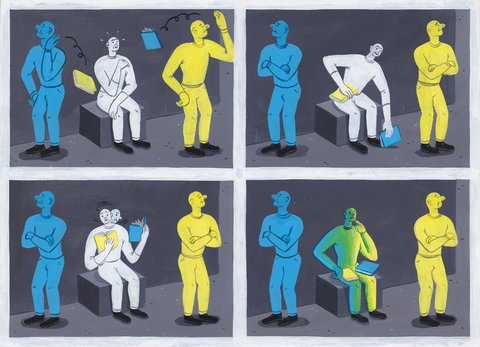 I know that I found an extremely strong resonance with the New York Times article I posted up on KW Hungry Minds on Facebook this past May (the cartoon above is from that editorial). The author, Michael S. Roth, is a university professor and he distresses about the tendency for his students to always be looking for faults and to immediate pass a judgment of agreement or disagreement with the readings he assigns. He argues that “fetishizing disbelief as a sign of intelligence has contributed to depleting our cultural resources” and I would add that there has an emerged an equal fetishizing of assertion of opinion.

I see it online all the time -in the comment sections of articles and on Facebook and other social media sites. Those who have their opinion quickly formed are all on top of an issue, putting forward the arguments for their side or highlighting the facts that support it. Those of us who are less sure don’t post anything or have a very hard time finding the words within the common discussion to express our lack of certainty. There just isn’t space for the way I think. I’m pretty sure that’s why I have this little blog. It is also why I so rarely feel like I have enough coherent thought to put up a post. I wonder if it is then a problem for me: is there some chemical that my brain is missing that, if I had it, I would be able to find my answers? Do I suffer from an undiagnosed mental deficiency? I hope that’s not the answer…

I continue to be pushed by the belief in my own intelligence and the belief that many of the people who do have strong opinions are intellectual equals or superiors. As I was wondering if it had something to do with personality types or brain function, I came across the work of the psychologist Jonathan Haidt. Barry shared with the group a Ted talk of Haidt's in which he showed some of the studies on liberal versus conservative formations of moral minds, with the message that it is in fact a different understanding of morality that drives the difference of opinions that the two sides have. He ended his talk with a quote by Buddhist philosophy Sent ts’an (c. 700 C.E.): “If you want the truth to stand clear before you, never be for or against. The struggle between ‘for’ and ‘against’ is the mind’s worst disease.” While I’m still processing the whole talk, it really spoke to me and to the little obsession of my mind I’m discussing here. I have gotten a hold of a copy of Haidt’s book The Righteous Mind and I think that this will grow my understanding considerably, once I get to reading it.

In the meantime, this past week I had the pleasure to hear a talk by Lorraine Code, by far my favourite professor from my time in the mid-1990s studying philosophy at York University. She spoke on “The Tyranny of Certainty.” She gave a number of quotes from Mitt Romney’s statements on the science of climate change and argued that the thinking of today is that without certainty people can deny knowledge, therefore say that they don’t need to know or to act. She showed how the belief that there should be certainty has dominated all sorts of arguments that people use when they encounter scientific issues. Someone in the audience (which was mainly made up of well-known scientists and philosophers of science) summarized that science is about finding out falsities and it is in fact the case that answers are often the highly qualified belief in the “least false of all those hypotheses tested.”

This talk got me thinking about the flip side of this trend. If the trend is towards the Tyranny of Certainty within groups looking to discredit things like climate change science, then what has this meant for those on the other side? From what I have observed, this has led to a glorification of the truth and objectivity of science that is way out of proportion with the field itself. I heard so many declarations of “that is what the science says” without context or concern about the cultural background and other multitudes of shortcomings of their God-like disciple. Perhaps the speakers believe that easiest way to fight against the epistemic shortcomings of those who take the battle to the field of certainty is to be absolutely certain in your position. Perhaps that is what is happening in the minds of the people who I have identified as somehow being different than myself. If this is the case, then I wonder if our society has fallen very ill with Sent ts’an’s “worst disease.” I hope that this is something that can be discussed in the upcoming debate on Haidt’s work and Sent ts’an’s quote.

There is one strong point that I want to make –try to hold back your shock. I have formed a slight irritation at the words “I think that” being put in from of declarations of opinion when it really indicates that thinking as stopped and the person means “I believe that” or “I conclude that.” I know that it’s an extremely common turn of phrase and I just need to get over myself. But it has come up more and more during debates as people make a point of asking me what I think about the issue. I know they are asking where I stand, if I am a yay or nay –and I never have found myself in either of those positions. My answer usually is that I don’t think, but what I really mean is that I have not concluded my thinking. The issues we debate in Hungry Minds are hard and I wonder all over the spectrum in my ideas about them. If I do find myself having a strong opinion about something, I often get very suspicious and wonder what is driving this sort of reaction in me.

Perhaps I am mentally ill and those moments are just sanity breaking through. As you can see, I haven’t found any answers in any of this either. I have highlighted some things that my mind seems to feel might hold some sort of understanding on all this, but perhaps that’s just my own bias wanting to think that there isn’t something wrong with my brain. But I’m open to the possibility that there just might be. If any of you have the answer for me –I’d love hear it, then take a great deal of time to think about it….